Save the file to your device and then rename it by taking out the .txt at its end. Your device will now open it as a gpx file 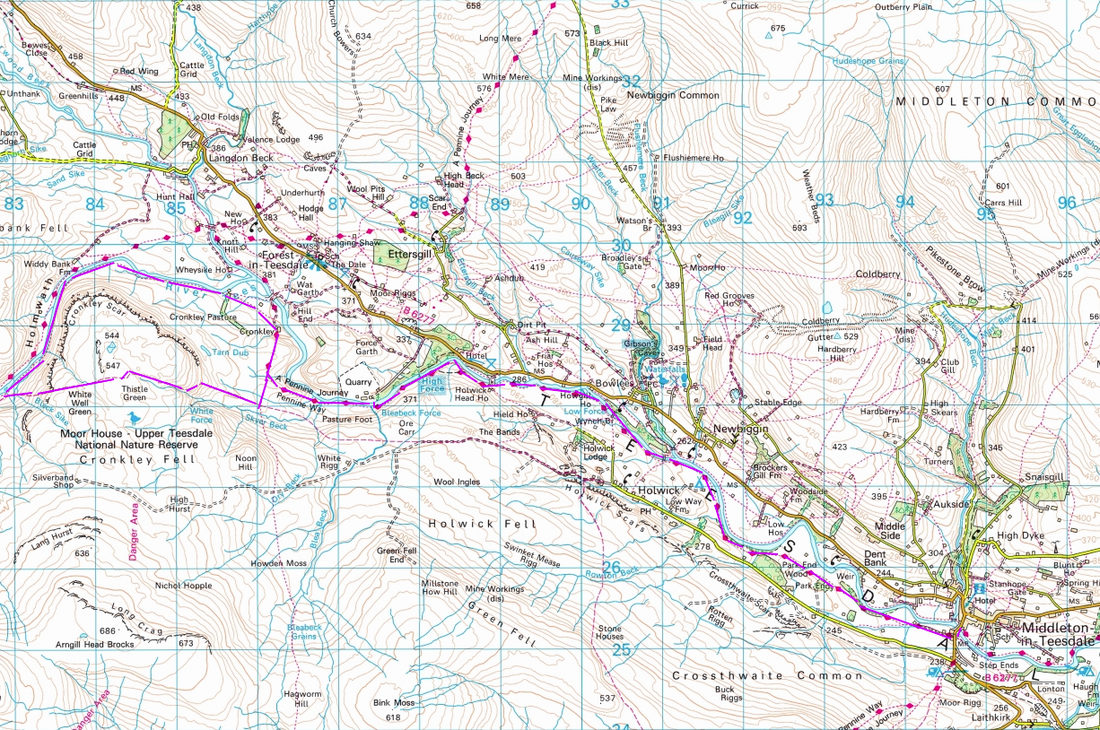 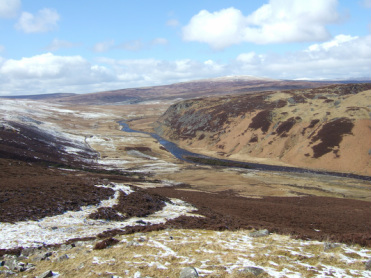 From the market place turn down Bridge Street and cross the old county bridge over the River Tees. Built in 1811, it used to mark the boundary between the counties of Durham and Yorkshire. Walk past the auction mart and take the footpath (the Pennine Way) signposted to your right. This soon enters a field and follows a track, past a couple of stone barns and over stiles for four fields before reaching the River Tees beside a small plantation of trees. After running alongside the river for about a hundred yards the path again leaves the Tees to cut  across  two meanders. It is a well marked path through meadows and a sunken lane. With Park Fell Wood on your left you return to the river and follow it for some distance past Wynch Bridge (a suspension bridge that is over 150 years old) and on past both Low and High Force. Just before you reach High Force a path off through the juniper bushes on your right leads you to an excellent viewpoint for England's highest uninterrupted fall of water where  the River Tees suddenly and spectacularly drops 70 feet (21 metres) over a band of whinstone (dolerite). It was seen as a national beauty spot as long ago as Victorian times and was painted by some of the greatest artists of the time such as Turner, but do take care not to get too close ! Continue up the Pennine Way and soon you will gain views of High Force from upstream as well.

After the waterfall the path continues past a large Whinstone quarry to the north of the river. By contrast on your left the beautiful waterfall of Bleabeck Force comes into view as the stream tumbles down Whiteholme Bank. Soon the path climbs up the boggy side of Bracken Rigg by crossing a causeway of wooden sleepers. Passing an old railway carriage you climb to the guidepost on the crest of the hill. The Pennine Way (our return route) goes right, whilst our path turns left down to a gate in the corner of the pasture. Ahead is Noon Hill and by now the old green track along the valley below is clearly visible. Continue through the gate to stepping stones beyond and on to join the green track at a Nature Reserve sign and turn right. This is an old drovers’ way that was used to drive cattle from Alston to Thisk and the Vale of York. It will lead you up the moor to Cronkley Fell. It is quite a steep climb, but one eased by the views of White Force tumbling down the hillside to your left and of the drove road going on towards Holwick behind you.

The path eventually reaches open moorland. Continue in the same direction, passing three fenced areas and a number of cairns. Inside these fences sugar limestone ecosystems are being protected from the attention of sheep and rabbits to give them the chance to recover. Look out for the world famous Teesdale Spring Gentian. Its blue spikes appear between April and June. There are more distant views as well. Looking in the distance from south west to north west a range of 2000 feet summits is seen (Mickle Fell, Backstone Edge, Meldon Hill, Great Dun Fell, Little Dun Fell, Cross Fell, Round Hill and Herdship Fell). The trig point a few yards to your right on Cronkley Fell is a mere 544 metres.

Cross the plateau of Thistle Green and as you drop down into a basin the first view of Falcon Clints ahead comes into view. Passing here the third fenced area of sugar limestone more frequent cairns appear. The largest, on the edge of the plateau, marks the start of the descent back to the Tees Valley. With Widdybank Fell in front of you and Cronkley Scar to your right work your way down towards an island in the Tees. You reach the bottom of the slope close to a wall and from here a faint path angles off towards the river but slightly to your right. When you reach the river bank follow it downstream. Quickly the path becomes trapped between the river and Cronkley Scar. For about half a mile you follow this path, through heather, juniper bushes and scree, tight in on the river. Often the route is aided by duckboards in an attempt to conserve the path. Opposite Widdybank Farm (Natural England’s office for the Upper Teesdale National Nature Reserve) the route begins to open up again. The path continues to follow the river for roughly a mile and a half. Finally at a barn look for a gate to the right and, going through it, take the track across the pasture, sticking well to the left of farm buildings, to reach the track to Cronkley Farm by a bridge over the Tees. Turn right here (once more on the Pennine Way) and follow the track up the slope towards Cronkley Farm, but instead of entering the yard, go right over a stile and down the side of the wall to reach a stile at the bottom of High Crag. The path slants up a steep slope through the rocks and gorse to a hidden stile. From here follow the side of the wall up to a good viewpoint before descending and crossing a stream and a stile. A little  way ahead the Pennine Way swings to the left, but instead of following it take the path used on the outward journey and once again make the short walk down to the old drovers’ way. This time, however, turn left towards Holwick.

The walk here is easy to follow along a  lovely green track. It rises alongside a wall to a cairn from which, if you turn to look behind you, there are wonderful views of Noon Hill and Cronkley Fell. As you walk on again the wall now leaves you to your left, coming to and passing through a fence before reaching a sizeable beck. There are stepping stones, but after heavy rain the water level can still rise above walking boot height ! If necessary you can walk upstream a short distance to find a shallower crossing point close to a grouse shoot track. Once across the stream the drovers’ way soon merges with the shoot track and you continue on towards Holwick. There are still excellent views over the Tees Valley. You cross another fence and eventually pass alongside a wall to your right as you approach the whinstone cliffs of Holwick Scars. On a sharp  bend the track splits, part going off to the left towards Holwick Lodge (a nineteenth century hunting lodge belonging to the Earl of Strathmore)  whilst our track continues on through a gate and into a impressive ravine alongside Holwick Scars. As the countryside opens up to your right the track soon becomes a road. After about another four hundred yards (soon after the telephone box) there is a signed footpath path off the road to the left. Head down towards the Tees, crossing a stile at the end of the first field. Near the bottom of the next field cross the stile in the wall to your right (not that ahead) and continue down to reach the Pennine Way alongside the River Tees (do not cross the river). Turn right along the Pennine Way to retrace the route to Middleton and find well-earned refreshments in one of the many cafes or pubs, or at the fish and chip shop.