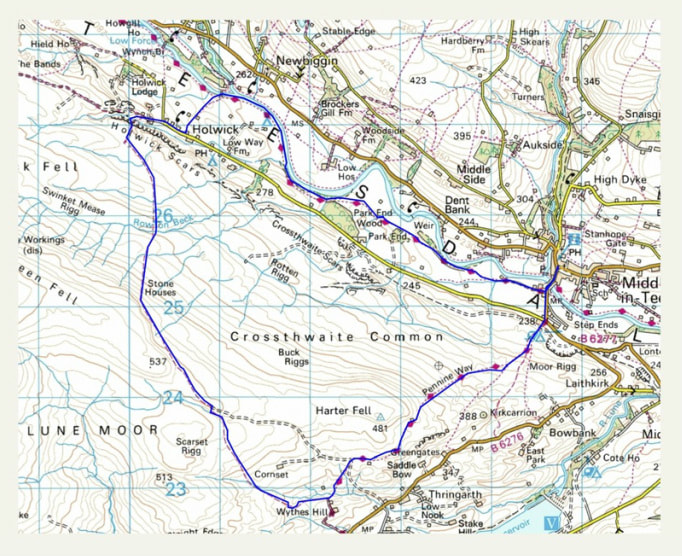 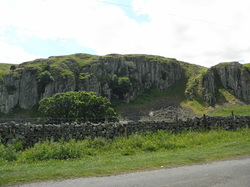 From the market place turn down Bridge Street and cross the old county bridge over the River Tees. Built in 1811, it used to mark the boundary
between the counties of Durham and Yorkshire. Walk up the hill until you come to the first road off to the right (signposted Holwick). Turn right and walk to the end of the house on the corner. To your left you will see a footpath sign for  the Pennine Way through a wooden gate. Follow the track up the hill, ignoring  two paths that angle off to the left towards the end of the ‘field’ as you rise. Reaching a green metal gate pass through and continue
on the track to find a stile and a dog gate beside a metal gate at the fence ahead. By now there are superb views back down the hill over Middleton. Once
over the stile ignore the path off to the left and turning towards the right follow the track staying parallel to the fence until the track swings back up
the hill passing a series of cairns and finally reaching a way marked metal gate. Throughout keep well over to the right of a distinctive mound topped by a
clump of pine trees. This is Kirkcarrion or Caryn’s Castle. It was named after after a Brigantean prince who was said to have been buried here in
pre-Roman times, but it is thought much more likely that a Bronze-Age tribal chieftain was buried in the barrow. His or someone else’s ghost is still said to haunt the site on horseback. In 1804 a local farmer removed some stones from the mound and uncovered a cist burial, but unfortunately removed some of the stones to build some walls on Crossthwaite Common.

Now head across to approximately the middle of the wall opposite and then having crossed this wall via a way marked metal gate with a ruined byre to the right, keep fairly close to the wall on your right through the next field until you come to the next gate which has a stile beside it. From here the path swings round slightly left towards a cairn and a ruined wall and passes through it by a fallen post with a way mark sign.
From here views of Grassholme Reservoir (completed in 1915 and used as a nature reserve and for angling and sailing as well as a water supply) and the smaller Selset reservoir open up. Follow close to your right until you reach a galvanised gate with a stone stile beside it. The track continue passing below a few trees to your right and on down to an old byre on your left. Pass over a stone stile by a gate and head for the farm in the distance. At the next gate the path descends to a track that passes through a way marked gateway. After then gate follow the track for about 50 yards and then branch off on a faint path to the right reaching the next gateway and stile.  Cross to the bottom right hand corner of the next field, crossing the stream by stepping stones and in the next field drop down to ford Carl Beck and join the track to Wythes Hill Farm. Just before the farm, where the track bears left, go through a way marked gate on your right. Now follow the wall on the left with the beck on your right. The path through this section of the walk is very faint and it is important to have with you a map to show it in relation to the walls.  (a compass is also important equipment for the later moorland section given how quickly visibility can change here).

After a gate the track bends off to the right to cross a small  tributary of Merry Beck a little to the left of where the wall crosses the Beck. Soon afterwards you cross the beck itself close to the remains of a shed. From  here make for the stone ruins visible roughly to north west. There is a short  steep climb and then where a wall with grouse butts comes into view on the left, the path drops down to the valley of  Rake’s Gill with its shelter, shooting butts and a toilet for the  Shoot’s guns.

From the shelter continue north west to climb up out of the valley on a track. When you come to a fence pass through the gate and continue to follow the track, now grassy rather than stone. Continue right up to the base of an unnamed lat topped hill with a spot height of 537 metres (all part of Green Fell). Here the track swings round to the right to follow round the base of the hill.  Superb views of Teesdale soon appear. Eventaully the track becomes a narrow, but clear  path over Crook o’Green Fell. On your left you can see rocky crags. Continue to a wall and then turn right to follow it down to cross Easter Beck. From here there is a narrow path on to a gate at the bottom on the left. The path becomes clearer. Cross Rowton Beck and head for the stile below. Follow a series of  white posts, white marked stones and cairns, passing a sheep fold and swinging right. The path is marked by cairns and takes you to a steep and narrow valley.  Head towards what seems to be the top of a crag. At the last moment you will see a stile. Scramble down the path keeping the stream on your left until as you near the valley below the path crosses the stream. Before careful as you descend this section. A little further down the path swings round to the right to follow above Scar Beck. Soon a waymark shows the route path down to the beck and at the bottom f a crossing point over the stream. Cross it  and climb up the bank on the far side to join a track.

Turn right towards Holwick. The track soon becomes a road. After about another four hundred yards (soon after the telephone box) there is a signed footpath path off the road to the left. Head down towards the Tees, crossing a stile at the end of the first field. Near the bottom of the next
field cross the stile in the wall to your right (not that ahead) and continue down to reach the Pennine Way alongside the River Tees (do not cross the river).
Turn right along the Pennine Way. The path follows the River Tees closely for the first mile, until, with Park Fell Wood to your right, it cuts across two
meanders. It is well marked throughout this section and for part of it follows a sunken lane., before rejoining the river bank briefly. Finally near East
Crossthwaite it leaves the riverside for the last time, passes a stone barn on the left and continues as a clear track to the end of the field and on through
the next two until it takes you out onto the road at Middleton. Turn left, crossing the bridge and climbing back up the hill into the village until you
reach the Market Place where you can find refreshments in one of the many cafes or pubs.


Click here to see more photos for this walk.